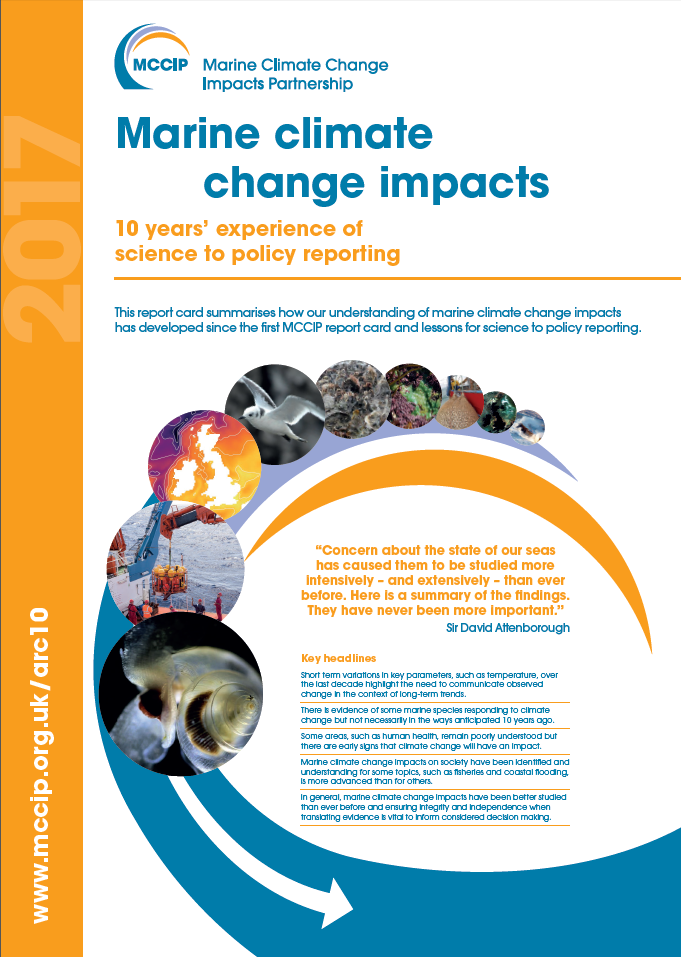 In 2006, a partnership of UK scientists, government, its agencies and non-governmental organisations (NGOs) established the MCCIP group to bring together expertise across marine and climate science. In their first report card, published in November 2006, MCCIP identified a range of impacts on the marine environment linked to climate change, and considered potential future effects. These included warming seas, changes in the distribution of marine species and increased risks of coastal flooding.

Building on contributions from 400 scientists over this time, key findings 10 years on are:

This report highlights the critical importance of independent, robust evidence gathering and the provision of clear messages when communicating climate change science to decision makers and the public. In particular, the partnership emphasises that recent short term variations need to be clearly placed in the context of longer term, human driven, climate warming.

“Concern about the state of our seas has caused them to be studied more intensively – and extensively – than ever before. Here is a summary of the findings. They have never been more important”.

“Since 2006 we have been working with the marine scientific community to provide timely, independent, non-biased information to policy-makers. As often happens in science, we have learnt that things are more complicated than first thought but in general, earlier predictions on climate impacts on the marine environment have been borne out.

What has also been exciting with this project has been being involved in the development and evolution of a robust mechanism for communicating science to policy-makers that has now been taken up as a model for use in other countries and for other elements of science to policy reporting”.

SAHFOS is one of the MCCIP partners, and in addition has three scientists directly contributing to the report. Professor Martin Edwards to the human health section, Dr Clare Ostle on Ocean Acidification and David Johns to non-native species.

"SAHFOS has been monitoring plankton from many areas around the world for decades, so when it comes to spotting non-native species in UK waters, the team are ideally placed to notice new plankton. This has been evident over the years, with a number of species new to the UK being identified, most recently the copepod Pseudodiaptomus marinus, a native to east Asian waters that likely came to the North Sea via ballast water in cargo ships."