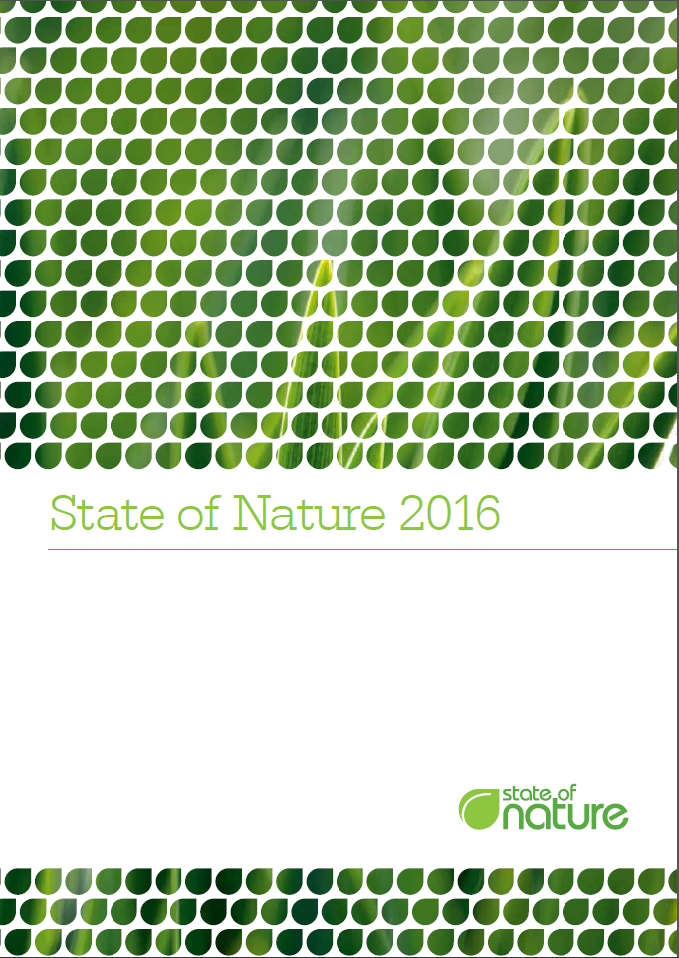 It's not too late to save UK nature but we must act now - that is the conclusion from a coalition of more than 50 leading wildlife and research organisations behind the State of Nature 2016 report.

Following the groundbreaking State of Nature report in 2013, leading professionals from from 53 wildlife organisations have pooled expertise and knowledge to present the clearest picture to date of the status of our native species across land and sea. This includes plankton data from Sir Alister Hardy Foundation for Ocean Science (SAHFOS). The report reveals that over half (56%) of UK species studied have declined since 1970, while more than 1 in 10 (1,199 species) of the nearly 8,000 species assessed in the UK are under threat of disappearing from our shore altogether.

There are many inspiring examples of conservation action that is helping that is helping turn the tide. From pioneering science that has revealed for the first time the reasons why nature is changing in the UK, to conservation work - such as the reproductions of the pine marten and the large blue butterfly and the restoration of areas of our uplands, meadows and coastal habitats. But more is needed to put nature back where it belongs.

As the UK and devolved administrations move forward in the light of the EU Referendum result, there is an opportunity to secure world leading protection for our species and restoration of our nature. Now is the time to make ambitious decisions and significant investment in nature to ensure year-on-year improvement to the health and protection of the UK's nature and environment for future generations.

Sir David Attenborough launched the State of Nature 2016 report in London on Wednesday, September 14, he said:

"The natural world is in serious trouble and it needs our help as never before.

The rallying call issued after the State of Nature report in 2013 has promoted exciting and innovative conservation projects. Landscapes are being restored, special places defended, struggling species being saved and brought back. But we need to build significantly on this progress if we are to provide a bright future for nature and for people.

The future of nature is under threat and we must work together; Governments, conservationists, businesses and individuals, to help it. Millions of people in the UK care very passionately about nature and the environment and I believe that we can work together to turn around the fortunes of wildlife."

In order to reduce the impact we are having on our wildlife, and to help struggling species, we needed to understand what's causing these declines. Using evidence from the last 50 years, experts have identified that significant and ongoing changes in agricultural practices are having the single biggest impact on nature.

The widespread decline of nature in the UK remains a serious problem. For the first time, scientists have uncovered how wildlife has fared in recent years. The report reveals that 2002 more than half (53%) of UK species studied have declined and there is little evidence to suggest that the rate of loss is slowing down.

Mark Eaton, lead author on the report, and Principal Conservation Scientist at the RSPB, said:

"Never before have we known this much about the state of UK nature and the threats it is facing. Since the 2013 report, the partnership and many landowners have used this knowledge to underpin some amazing scientific and conservation work. But more is needed to put nature back where it belongs -  we must continue to work to help restore our land and sea for wildlife.

There is a real opportunity for the UK Government and devolved administrations to build on these efforts and deliver the significant investment and ambitious action needed to bring nature back from the brink.

Of course, this report wouldn't have been possible without the army of dedicated volunteers who brave all conditions to survey the UK's wildlife. Knowledge is the most essential tool that a conservationist can have, and without their efforts, our knowledge would be significantly poorer."

David Johns, a co-author on the report, and SAHFOS's Laboratory Manager and Research Scientist highlighted that:

"Plankton, being at the very base of the food web, play a crucial role in the development and life of larger marine organisms, such as fish, in UK seas. SAHFOS has collected and analyzed over 60 years of data, and we can clearly see large changes that are impacting higher trophic levels. These changes add to the complexity of managing the marine environment."

For an overview report of England, please click here, alternatively a fully copy of the State of Nature 2016 report can be found here.