A new public awareness campaign targeting the issue of plastics in the world’s oceans opened last month, featuring SAHFOS and the CPR Survey. The Ocean Plastic Lab exhibition was launched in Turin, Italy and has now travelled to Paris where it will be open to the public until 17th November, before continuing its tour of the G7 countries over the next 18 months, inviting the public to engage with scientific work being done right now around the world. 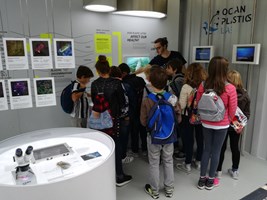 Led by the German Federal Ministry of Education and Research together with the German Marine Research Consortium, the exhibition showcases the contribution of science in understanding and combating the issue of plastics in the ocean. Arranged over four consecutive shipping containers the exhibition takes visitors on a journey exploring the extent and impact of plastics in the marine environment. Container 1 is the Ocean Plastic Lab and introduces visitors to the exhibition, the second container allows visitors to 'SEE the waste' through various scientific exhibits routinely used by scientists to determine the sources, quality and quantity of marine plastics in the world’s oceans. Building on the findings of the second, the third container is designed to help the visitors 'DETECT impacts' of marine plastics on marine flora and fauna. After having identified and quantified plastics in the ocean and having analysed its effects on marine animals, ecosystems and humans, the fourth container invites visitors to 'BUILD co-solutions' by making informed personal decisions and though participating in citizen science activities. Each of the containers feature interactive installations, displays and animations on loan from laboratories, research institutes and other science and civil society partners from around the world.

Supported by the European Commission, this travelling exhibition encompass interactive installations, displays and animations on loan from laboratories, research institutes and various other science and civil society partners worldwide. SAHFOS contributed scientific information and images to this exhibition, as well as a sample of Continuous Plankton Recorder silks, which are used to collect microplastics from the open ocean. SAHFOS has been recording microplastics on CPR samples since 2007, however has an archive dating back to the late 1950’s, housing all CPR samples. This unique resource enables scientists to go back in time and investigate environmental conditions of the time. Research using samples from the CPR archive has found a significant increase in microplastics in our oceans (link to http://science.sciencemag.org/content/304/5672/838). 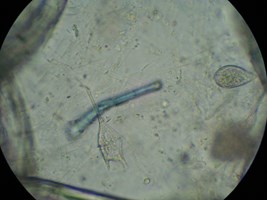 In the context of current discussions about science in society, the Lab demonstrates science's fundamental role in tackling societal challenges and highlights that society is an integral part of science. For further information, including updates on tour dates, visit http://oceanplasticslab.net/index.php