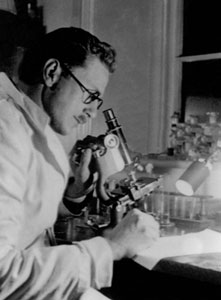 Hundreds of young scientists have descended on Liverpool for the Challenger Conference for Marine Science 2016.  The 17th Biennial conference is a 3 day lecture and poster programme and acts as a showcase of marine science and technology, covering all areas of ocean research and hosts those studying or working in marine science or industry, even welcoming young scientists from around the world.

A small group of SAHFOS scientists have travelled to Liverpool from Plymouth to participate in the Conference and share their knowledge via Lecture’s, talks and poster sessions. It’s timely to share and celebrate the work of the Continuous Plankton Recorder (CPR) Survey, as 2016 marks its 85th Anniversary.

The CPR Survey is the longest running and most geographically extensive marine ecological survey in the world (currently having been towed for more than 6 1/2 million nautical miles) and owes its existence to one man: Alister Hardy. An Oxford scholar, Hardy was taken on as zoologist on the RRS Discovery voyage to the Antarctic 1925-27. It was on this voyage he developed the CPR. From 1931, he used the CPR to help fishermen decide where to let their nets out to catch fish, this then developed into an understanding of how plankton are distributed across whole marine basins.  Initially across the North Sea, but in 1959, the first trans-Atlantic tow was carried out. This and his ground-breaking research into plankton forms the basis of the work of SAHFOS today.