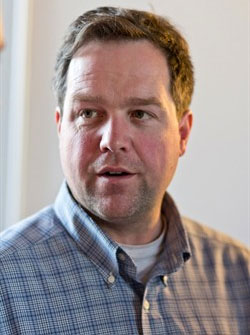 SAHFOS, one of the world's most respected marine science organisations, is delighted to announce the appointment of Dr Willie Wilson as its new Director from 1stSeptember 2015.  The appointment was made after an international search and selection process.

A distinguished virologist, Dr Wilson brings a wealth of experience of leading and managing research and operations.  He is a former Director of the National Centre for Marine Algae and Microbiota (NCMA) at Bigelow Laboratory for Ocean Sciences in the United States. Dr Wilson has also had roles as Head of Science at Plymouth Marine Laboratory and Research Fellow at the Marine Biological Association of the UK (MBA).

Clearly enthusiastic about working on what he describes as 'a gold-mine of planktonic material', Dr Wilson said:

"I am truly excited and energised at the thought of working with SAHFOS, an organisation which conducts research on the impact of climate change on the health of the ocean. SAHFOS's environmental message is one everyone should genuinely care about to help safeguard the future of our planet."

Dr Wilson succeeds Professor Nicholas Owens, who has been Director at SAHFOS since 2012 and who is moving to be Director of the Scottish Association for Marine Science in Oban, Scotland.

Dr Wilson joins at an exciting time for SAHFOS.  The non-profit organisation has entered a fresh period of development and expansion, where the plankton research emanating from the Plymouth institute is addressing pressing global issues, such as marine pollution and human health, climate change, biodiversity and over-fishing; influencing and shaping fishing and environmental government policy at national, European and international levels.

Professor Peter Liss, Chair of SAHFOS Board of Trustees said:

"It's fantastic to have such a distinguished and dynamic scientist on-board.  Willie understands what SAHFOS is about, and how its unique context can help push the boundaries of marine science.  His research and leadership skills, his scientific vision, and his international reputation will boost our impact.  This is great news for SAHFOS and marine science in Plymouth."