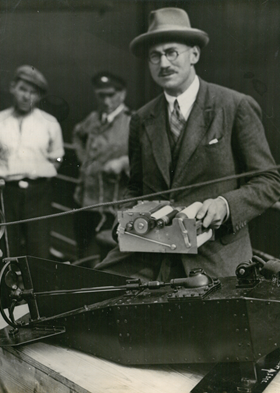 Alister Hardy is known among plankton researchers for developing and employing his Continuous Plankton Recorder (CPR). The CPR likely needs no introduction. Hardy used the first version of the CPR during the 1925–1927 Discovery Expedition to the Southern Ocean.

However, while the CPR is well known, many plankton researchers today are likely unfamiliar with the story of its genesis and its precursors, as well as the full breadth of Hardy’s contributions to plankton research.

The following account is based on both Marshall’s biographical Memoire of Hardy (Marshall, 1986) and Hardy’s articles and books. 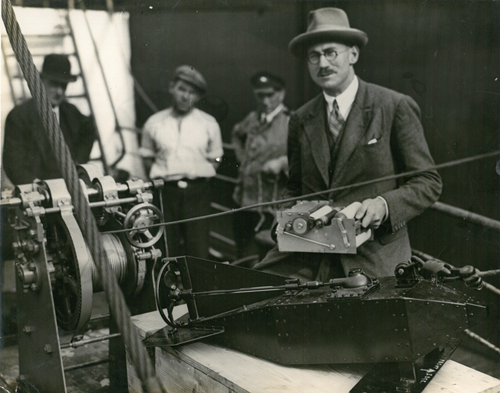 Alister Clavering Hardy was born on 10 February 1896 into a relatively well-to-do family. Hardy’s college education was interrupted by the outbreak of the First World War. Hardy first served as a commissioned officer, an Acting Captain, in charge of a company assigned the duties of digging and manning trenches along the East Coast of England followed by service as an assistant camouflage officer in London.

Hardy returned to Oxford in 1919 where he focused on zoology. It was an Honors Class on vertebrate zoology where he met his future wife, Sylvia Garstang. In 1920 (at age 24), Hardy was awarded an Oxford scholarship, the Christopher Welch Scholarship allowing him to work at the Stazione Zoologica in Naples for 6 months. It was a key event in Hardy’s life as it was in Naples that he was introduced to marine plankton. Hardy graduated from Oxford in 1921, and interested in plankton, immediately went to work as an Assistant Naturalist at the Fisheries Laboratory in Lowestoft, charged with investigating relationships between plankton and fisheries.

Hardy began at Lowestoft on 1 August 1921, and by the last week of August, he was already sampling the plankton during survey cruises searching for herring spawning grounds. In his first publication on plankton, he reported on swarms of pteropods off the East Coast of England found in August and September 1921. By March 1922, Hardy was engaged in his massive study of the food of herring, from the larval stage to maturity, that he would publish in 1924. He used his data, and the previous findings of Marie Lebour (see Dolan, 2021), to construct the truly remarkable comprehensive vision of herring predator–prey relationships throughout the life history of a herring. The work solidified Hardy’s reputation as a plankton specialist. The original diagrammatic version of 1924 was used by Elton in his classic text “Animal Ecology”, one of the first textbooks of ecology. 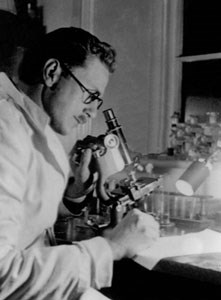 Alister Hardy was a pioneer, a promoter and a populiser of plankton research. His first studies revealed the complex food web of the plankton supporting the herring fishery. Hardy early on began developing sampling devices to reveal patterns of the distributions of planktonic organisms, and among them, the CPR has proven invaluable. Less well known is that Hardy also worked on “aerial plankton” making valuable contributions to our knowledge of atmospheric transport of insects and conducted several studies examining the vertical migrations of zooplankton as well as bioluminescence in the plankton. Nearly throughout his career, Hardy made efforts that today would be characterized as “outreach”: from lectures such as “Plankton Ecology in the Service of Man” (Hardy, 1943) to his popular books in the late 1950s and 1960s.

In March 1922 that Hardy made a discovery that would lead him to eventually developing the CPR aboard a survey cruise to map the distribution of herring in the southern portion of the North Sea. Having completed sampling a day earlier than planned, Hardy decided to repeatedly sample a single station every 6 hours throughout last 24 hours of the planned sampling days. He found that variability among the four samples was greater than among all the stations sampled. It was this experience that convinced Hardy of the need to sample large areas quickly as possible to acquire a synoptic view of distributions, thus the need for a device continuously sampling young fish and plankton, documenting variability mile by mile.

In May 1924 that Hardy started work on the Discovery Expedition. The expedition goal was to investigate the biology of the Southern Ocean whaling areas with a special focus on krill, known to be an important prey of whales. According to Hardy himself, it was then and there that he invented the first version of his CPR. It was formally introduced, along with some preliminary results from the expedition sampling, in a short article in Nature in 1926.

His return from the Discovery Expedition coincided with the opening of a new external college of the University of London in Hull University College Hull. Hardy was named Professor of Zoology in 1928 and profited from the university workshops in further developing both the CPR and a version of a Plankton Indicator. While at Hull that the first CPR surveys were conducted (Hardy, 1935b). These early efforts in CPR studies are relatively well known (e.g. Reid et al., 2003).

The Hull years of Hardy were also when he conducted pioneering work on “Aerial Plankton,” the organisms transported passively by currents in the atmosphere. He deployed plankton nets from mast or attached to a kite when the ship was on station during a survey of the southern North Sea. He collected fairly large numbers of insects using nets of about 1 or 2 m diameter and concluded that the numbers suggested that large populations of “aerial plankton drift over the seas” .

Two articles he published in 1960 that became famous, or notorious, depending on one’s point of view appeared in the magazine the New Scientist in March 1960, based on a lecture Hardy had given to British Subaquatic Club. The first article, “Was man more aquatic in the past?” raised the hypotheses that Homo sapiens evolved as an inhabitant of the seashore, exploiting fish and shellfish of shallow depths. As supporting evidence, Hardy cited diverse lines ranging from existence of a layer of fat underlying the skin in humans similar to that of marine mammals, to our general attraction to the seashore. The article has been cited hundreds of times. In the second article, appearing the following week, “Will man be more aquatic in the future?” Hardy prophesized that humanity would necessarily, in 100 years’ time, return to the seashore through aquaculture and fishing. 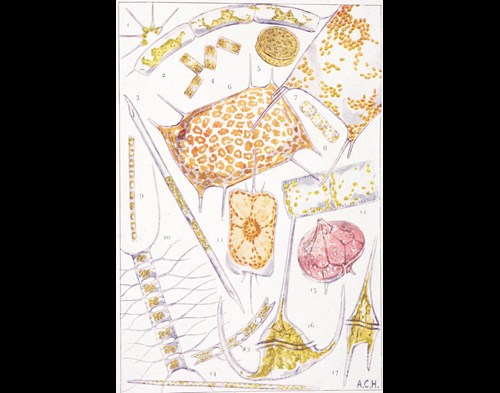 . In it Hardy proposed the hypothesis that having religious experiences was a favorable characteristic of awareness in the evolution of humans

In the latter years, Hardy’s activities were not limited to studies of religion. He was also a veritable proponent of plankton research through popular books in which plankton studies were prominent and the beauty of plankton shown using his own striking watercolors. The first was “The Open Sea Its Natural History: The World of Plankton” published in 1956. It was reviewed very favorably, with comments on the beauty of Hardy's artwork. A second volume followed in 1959 “The Open Sea. Its Natural History. II. Fish and Fisheries, with Chapters on Whales, Turtles and Animals of the Sea Floor.” The volumes were illustrated with Hardy’s artwork including 24 color plates, 17 of which showed the organisms of the plankton. The second popular work of Hardy was his book on the Discovery Expedition, based upon his own journal notes and artwork from the voyage, Great Waters. While the main focus was telling the tale of the expedition, he included several color plates showing not only the plankton of the Southern Ocean but also the plankton of the tropics encountered during the voyage.