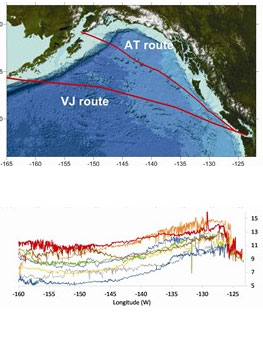 After several years of being cooler than average, the waters of the NE Pacific have been heating up recently. Whitney (2015) reported spring temperatures deviating 3.5 standard deviations from the long-term mean in the oceanic waters of the NE Pacific, covering the transition zone just south of where the CPR transects run. The paper concluded that winter primary productivity was the lowest in the satellite record and wondered about implications for higher trophic level productivity. By the autumn of 2014 researchers in Alaska were seeing waters 2°C above normal (Hopcroft, pers. comm.) with associated warm water plankton on the Alaskan shelf and speculated that the effects would be felt well into 2015. Although the VJ and AT routes have a relatively short time series of instrumentation, we can clearly see the warmth of 2014 in the records from the Vemco minilogger (AT route) and Brancker CTD (VJ route). Figure 31 shows the temperature data for spring 2014 for both routes compared with previous years (June data are plotted for the VJ route as this late spring transect has a very consistent path). 2013 was also relatively warm, but for the most part 2014 values were the highest in our records for much of the transect. Plankton analysis is not quite complete for the 2014 data but provisional results suggest that the effects of the warmth are evident..