The CPR Survey has co-evolved with policy drivers and through the Survey's development of policy-relevant applied indicators, the CPR has played an integral part in providing relevant, targeted advice to UK, European and international decision-makers. The uniqueness of the CPR dataset means the Survey holds a distinctive position in the marine scientific policy community. The Survey’s issue-driven focus and applied indicator approach have played key roles in ensuring the continuation of this monitoring programme during tenuous economic climates; therefore maintaining the applied aspect of CPR research is crucial. 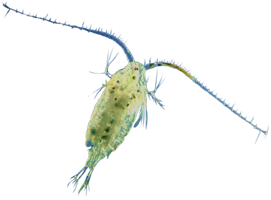 Warmer water species are currently increasing in the North Sea due to regional climate warming and the North Atlantic Oscillation. In terms of a productive environment, this change is currently considered detrimental because the warmer-water species are not replacing the colder-water species in similar abundances and may negatively impact other trophic levels, including fish larvae. For example, an important zooplankton species has declined by 70% in the North Sea. There is a high confidence these trends are related to regional climate warming.

Seasonal timing, or phenology, is occurring earlier in the North Sea and related to regional climate warming. For example, some species have moved forward in their seasonal cycles by 4-5 weeks. However, not all trophic levels are responding to the same extent; therefore in terms of a productive environment this change is considered detrimental because of the potential mis—timing (mismatch) of peak occurrences of plankton with other trophic levels, including fish larvae. There is a high confidence these changes are associated with regional climate warming.

At the regional scale, it has been found that most phytoplankton trends are related to hydro-climatic variability as opposed to anthropogenic input (eg. nutrient input leading to eutrophication). This means that the North-East Atlantic as a whole is considered to be fairly healthy. This is not to say, however, that certain coastal areas and the southern North Sea are not vulnerable to eutrophication and climate change may also exacerbate these negative effects in these vulnerable regions. It has also been found that the number of micro-plastics collected on CPR samples is increasing and the frequency of occurrence and bloom timing of some Harmful Algal Bloom species are related to regional climate warming.

Organisms that could be particularly vulnerable to acidification are the calcifying organisms such as coccolithophores and foraminifera. The CPR Survey is proving a critical baseline and is currently monitoring these vulnerable organisms in case they start to show any negative effects due to acidification in future. Over the last few decades, trends in calcifying organisms recorded by the CPR Survey have been correlated with changes in Northern Hemisphere Temperatures rather than changing pH. However, acidification may become the main driver of change in the future.