Peter Wiebe, a member of the SAHFOS Science Advisory Board (and previous SAHFOS Trustee) has been awarded the ICES Outstanding Achievement Award.  He was presented with this prestigious award at the ICES Annual Science Conference in Riga, Latvia in September. The award signifies the highest level of recognition for services to ICES science, and Dr Wiebe, emeritus scientist at Woods Hole Oceanographic Institute, was nominated for the award based on his lifelong academic contributions to zooplankton ecology and bioacoustics, and his commitment to working within ICES. 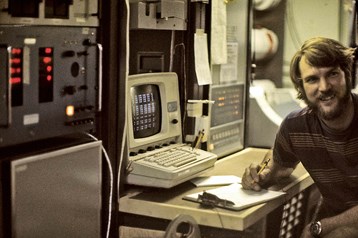 Through his career, Peter Wiebe has made a major contribution to our understanding of the ecology of zooplankton, its role in the ecosystem and how it affects fish production in the widest sense. He has been long-standing and has a very active role in the Working Group on Zooplankton Ecology (WGZE), a group that has itself had active SAHFOS participation over the years. He has played a leading role in many of the major accomplishments of the group, including the planning and leadership of workshops at sea and his co-authoring and editing of The ICES Zooplankton Methodology Manual which has greatly improved the standards for zooplankton studies. This 684 page volume remains the classic reference in the field. Recently he was lead author of a substantial paper on the history of the WG, "The ICES Working Group on Zooplankton Ecology: Accomplishments of the first 25 years" published in Progress in Oceanography, 141, p. 179-201. Throughout this work he has always recognised and promoted the value of the CPR programme.

Peter Wiebe believes passionately in supporting the next generation of scientists in the field. His mentorship and training of early career scientists is something that many of his peers highlighted in supporting the award. His passion when discussing science and motivating young scientists are characteristics that continue to benefit SAHFOS.

Characteristically, in accepting the award, Peter stressed in his speech the importance of collaboration and of interdisciplinary research, "It is these people who have made it possible for me to do what I have done."